In part one of Top Life Saving Vehicle Features, I introduced the topic of safety as a primary targeted goal for automotive manufacturers. Pedestrian detection and night vision were the two vehicle safety equipment technologies discussed, which primarily concern the safety of pedestrians or other animate objects. In part two below, the safety features discussed are primarily geared towards collision avoidance with other vehicles.

One of the most common reasons for vehicle collisions is the lack of awareness for the driver's surroundings.

What's In Front and What's Behind?

Blind spot detection, cross traffic alert, lane departure warning, and automatic braking are all amazing vehicle safety features available from many auto manufacturers. Some of these makes include Volvo, Ford, Toyota, GM, BMW, Audi, Lexus and the list goes on.

The reason why I lumped these few auto tech features together is that they are all very similar in purpose and in many cases are paired together. The technology of sensors and cameras are used to raise the driver's awareness of his or her surroundings whether it's backing out of a parking spot, changing lanes, or staying within a current lane. Though these three vehicle safety equipment features are connected by similar technology, you will soon be able to distinguish how each contributes to safer driving differently 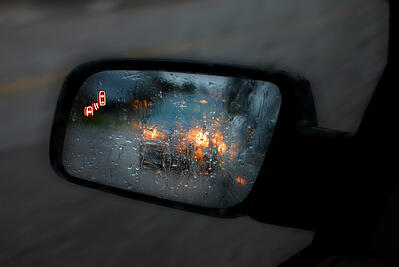 Blind spot detection (BSD) is a great automotive safety feature for eliminating lane changing errors, especially at high speeds on the highway. It shouldn't replace the best practice of looking over your shoulder but is great for times where other vehicles appear after the fact or approach quicker than anticipated.

Active blind spot detection is comprised of either an electromagnetic sensor that recognizes vehicles within close distance or cameras that collect data of the car's surroundings and are analyzed by the computer.

When there's newer vehicle safety equipment on the market, the first name you think of is... drum roll please... Volvo. That's right, Volvo was the first auto manufacturer to implement blind spot detection. They originally used the camera option and then later switched to electromagnetic sensors located in the vicinity of the rear bumper. When a car enters the blind spots, a warning light will appear in the side view mirror housing. If the driver signals to take a turn with a car in its blind spot, the warning light will flash advising the driver not to switch lanes.

Most vehicles with blind spot detection function very similar to Volvo's BSD with slight variations. The most common location for the visual warning to be displayed is either in the corner of the mirror or housing for the mirror. Infiniti's blind spot detection system displays the visual warning near the windows on the inside of vehicle, which can't be affected by weather. Some systems can raise more awareness than necessary, in which case you could deactivate the option. Upon starting the car back up, sometimes the feature goes back to its active position.

Of course there are always more proactive options. Infiniti was the first of manufacturers to take that next step in assisting the driver with their Blind Spot Intervention (BSI) technology. Fortunately, the active steps that this system takes are just slight steering nudges that can be overridden if necessary.

There are times when the car parked next to you completely blocks your field of vision and forces you to take a leap of faith when backing out of a spot. This scenario tends to be even worse when your backing out into a main road and could really damage your car.

Cross traffic alert, paired with the blind spot detection system, simply notifies drivers if there's a car near by when backing out of parking spots with bad visibility. Vehicles that offer cross traffic alert use the sensors and warning alerts from the BSD system. Some brands such as GM pair cross traffic alert with the rear camera system, which notify the driver of obstacles in their path on the display screen. Similar to BMW's vibrating steering wheel warning for their BSD and LDW systems, GM implemented seat vibrations on both sides of the seat for their cross traffic alert system.

Upon viewing several automaker's cross traffic alert systems, this safety feature isn't activated until the vehicle is put in the reverse and is only effective from 0-5 mph. Many of these systems only register cars approaching at speeds of 5-18 mph.

The distance in which these car sensors recognize other vehicles approaching varies between different makes. Volvo's cross traffic alert system has a 100 ft range for both right and left sides of the vehicle, while Ford's is only 45 ft and GM's 65 ft.

Lane departure warning systems also notify drivers of their side by side surroundings, but rather than detecting other cars, they recognize the driver's lane spacing.

As a driver, it's easy to be distracted by your surroundings, whether it's admiring the nice view outside of your car or having a full blown conversation on the phone while eating dinner and changing the Pandora station. There have probably been times where you were far too exhausted to drive, but did anyways. And though many automotive manufacturers aren't going to mention this in there ad campaigns, there are probably times where you drank too much at dinner and should have called a cab.

All of these scenarios can result in drivers losing focus of their steering. The lane departure warning feature offered on many current vehicles is designed to raise the awareness of lane spacing and avoid lane departure for any length of time if at all. It's important to understand that this advanced auto tech should not be used as an excuse for making poor driving choices, but should simply be used as an aid to avoid human errors that can have some serious repercussions.

The lane departure feature uses a camera either placed on the windshield above the rear view mirror or in the rear bumper to keep track of where the vehicle's location is in relation to the left and right lines. Similar to other warning systems, a visual and/or audible warning is given when the car departs from its intended lane. More often than not, the visual warning will be displayed in the vehicle's instrument cluster. If of course the driver puts on his or her turn signal or disables the safety feature, then there won't be a warning.

As usual, each car has its own spin on the technology. Some of the more unique ones include a lightly vibrating steering wheel warning (BMW 5-series and 6-series) and a moderate to loud audible warning depending on the color of the line you're crossing (Kia Cadenza Premium).

Some of the more recent vehicles, including but not limited to the 2013 and 2014 Ford Fusion and Explorer, 2014 Acura TLX, and 2015 Dodge Charger offer Lane Keeping, which actively keeps the vehicle in its lane. We will discuss this feature more in depth in our autonomous driving blog article coming soon.

So I'm sure most people are familiar with automatic braking systems and if they're not, the name couldn't better describe the technology. Since automatic braking is such a well known newer vehicle safety feature, why would I save it for last?

The reason why I saved this feature for last is because automatic braking systems don't strictly just warn the driver of their surroundings like the other features above - with the exception of Infiniti's Blind Spot Intervention. As titled, these systems take active measures in braking for you.

This idea has raised some discomfort for myself and I'm sure many others given that it excuses poor driving habits and can be unsafe when situations are misread by the system. After better understanding how these systems actually work, my mind has somewhat been put at ease.

The most comforting reoccurring fact that I've stumbled across is that automatic braking systems are not a means of autonomous driving but are simply just an extra safety step above visual and audible warnings. They are designed to either avoid fender benders or reduce the severity of collisions at higher speeds.

Like all the other vehilce safety equipment mentioned at this point, cameras and sensors are the two types of methods used for automatic braking systems. With this auto tech, getting the car to self brake is not the difficult part but assuring that these systems recognize potential collisions and only brake when necessary is the real challenge.

Some automatic braking systems are only designed for braking at slow speeds such as Volvo's City Safe system (18 mph and under). Subaru's EyeSight is one of the highest ranked systems capable of fully avoiding an accident at up to 25 mph. At speeds higher than that, automatic braking technology most likely will not fully avoid an accident but will drastically minimize the outcome of the accident and often times save lives.

In review of all the top automotive safety features i've mentioned here in part two, and back in part one, they most definitely all play a big role in saving the lives of drivers and pedestrians. Though most of these safety features don't intervene, they certainly help raise driver awareness and effectively avoid many accidents, some that could be life threatening.

Please share your thoughts with us in the comments section below!

Proceed to the next article on self-parking cars