One of the primary areas automotive manufacturers channel their energy and resources is in developing technology to increase vehicle safety. Above all other means of transportation, by a significant margin, automotive has the leading number of fatalities for both drivers and pedestrians.

Though the majority of these fatalities are most likely a result of the vehicle operator’s poor driving habits, irresponsible decisions, or bad visibility; automakers have continued to develop technology that could very well save lives and decrease these numbers.

Given the nightmares you hear about in the news, it’s comforting to know the auto industry is actively taking steps to help us sleep at night. Over these next two blog articles, I'll be discussing some of the top vehicle safety technologies to date.

Firstly, let's start off with a few statistics.

Just within the last eight years, since 2005, traffic fatalities have decreased by about 25 percent. This is an incredibly good statistic, especially since the growth of population has increased the number of vehicle owners.

Below I've included some graphs comparing the different transportation fatality statistics of 2012, made available by the National Transportation Safety Board (NTSB). 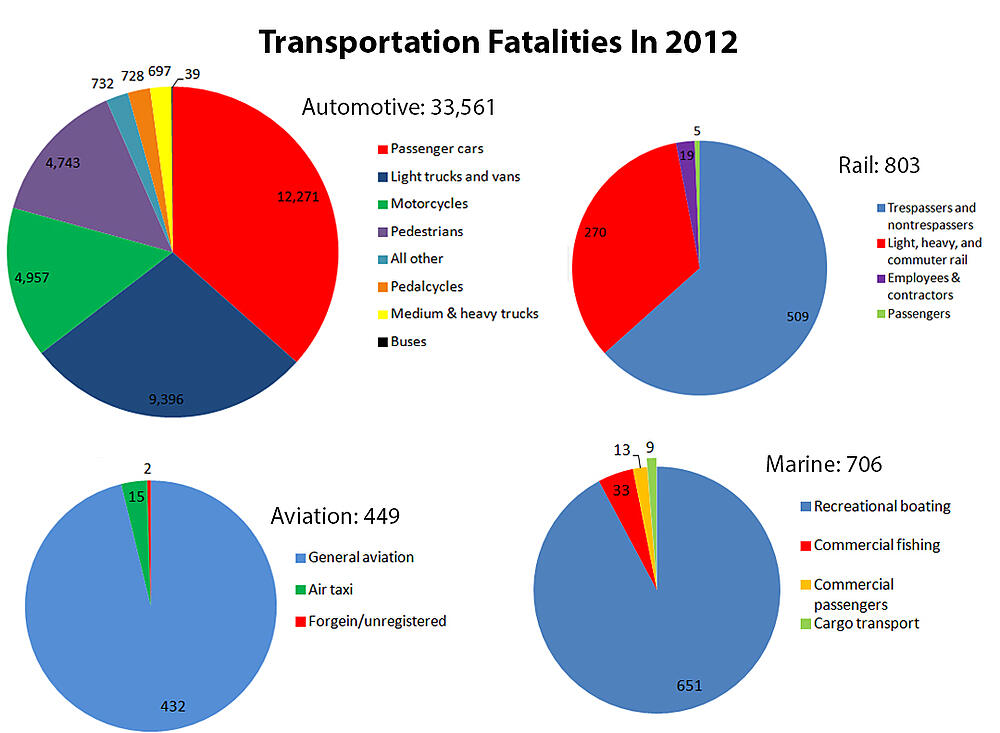 Here I've included a graph of the automotive fatality numbers from 2000 to 2012. This will give you a frame of reference for the general statistical pattern prior to the gradual 25% decrease starting in 2005 (aside from 2012).

Could these statistics be proof that automotive technology advances are playing a part in safer driving? I certainly believe it's a big factor. Let's check out some of these newer vehicle safety features

Pedestrian visibility has been a concern ever since the existence of automobiles. The importance of pedestrian safety, at least from my experience, has been beaten in our heads since the time we could walk to the time that we learned how to drive. The truth may hurt, but whether we are pedestrians or drivers at any given point, the main focus is to get to our destination, which often entails some degree of tunnel vision. That being the case, we may unintentionally cross the street without looking both ways or overlook pedestrians on either side of the cross walk. Pedestrian detection systems have taken that into account by notifying the driver of nearby pedestrians. 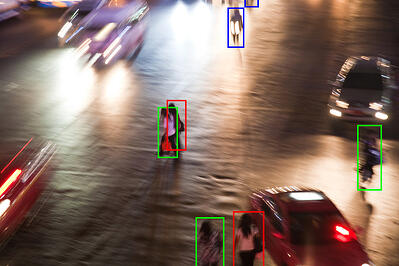 Volvo, Mercedes, BMW, Audi, and Lexus were the first five manufacturers to get the ball rolling on this life saving auto tech, all of them have some similarities and differences. They all use cameras and sensors to detect pedestrians, followed by an audible and/or visual warning.

So how do these systems vary? The 2011 Volvo S60 pedestrian detection system is able to detect pedestrians during the daytime at speeds 22 mph and under. This particular system notifies the driver with beeping and flashing lights and actively brakes when action isn’t taken. If the driver attempts to steer out of the way, the detection system will recognize their involvement and stop braking.

This is definitely a great solution if you’re driving in densely populated areas at low speeds, but if you’re cruising along during dimly lit hours, the Volvo isn’t gonna cut it. Mercedes, BMW, Audi, and Lexus all offer night vision, which we’ll get into shortly.

Though the cost of these systems and cars are overall more expensive, they can recognize the pedestrians from further distances at higher speeds and show images of the pedestrians in their choice of display. Like the Volvo, these four brands' pedestrian detection systems also actively brake if they sense a near accident.

Honda has developed a less expensive option that detects pedestrians based on their smart phone GPS rather than cameras and sensors. In the event of a near accident, the driver would receive an audible and visual alert, while the pedestrian’s phone would receive a warning, disabling any function they may be using (text, email, music, etc). The only problem with this technology is that not every pedestrian has a smart phone or is using it when crossing or walking alongside the street.

Toyota also has some plans. In attempt to rebuild the bad reputation they got from their Prius pre-collision safety system, Toyota announced their newest vehicle safety advancement, “Pedestrian-avoidance Steer Assist.” Similar to Lexus’s pedestrian detection, it will brake within close encounters AND will steer the vehicle out of the way if option A isn’t sufficient enough. I don’t know how I feel about my car steering for me, but Toyota seems to think it’ll be great.

So we know that night vision technology compliments pedestrian detection rather nicely. In fact, it probably ranks highest in successful pedestrian avoidance. A NHTSA statistic shows that in 2010, 68% of pedestrian fatalities took place at night.

Not only will night vision save many pedestrians, but the deer in headlights scenario won’t end as badly for the deer or vehicle and more rodents will run free. 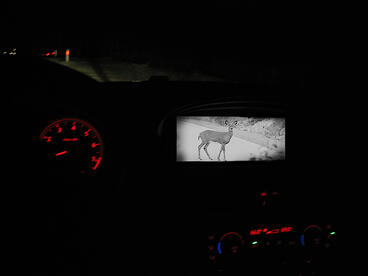 There are two types of night vision systems, active and passive. Pedestrians and animals are made visible to the driver on three different display types, including the instrument cluster, navigation system, or lower windshield.

Active night vision uses infrared light, invisible to humans, in conjunction with cameras that can detect pedestrians and animals from long range distances, which appear on whatever display option the car manufacturer uses. There are two types of active systems, one is gated and the other non-gated. Both have their pros and cons, such as that gated systems have a longer range and perform better in rain and snow; however, non gated systems have a higher resolution picture, work better in warmer weather, and are more compact.

Passive night vision detects the thermal radiation of pedestrians and animals with a thermographic camera rather than using a lighting source. The process of how passive night vision functions is very similar to that of active night vision, where the pedestrian(s) or animal(s) are picked up by the sensor, processed by the computer, and then shown on the display screen. Though passive night vision technology has a wider range than active and detects animate objects and other vehicles very well; it doesn’t do a good job detecting objects that are inanimate and also doesn’t function very well in warmer weather.

Night Vision on the Market

Both Mercedes and Lexus use active night vision, first found on the Lexus LX 470 in 2002 and then later found on the Mercedes S-class in 2005 and E-class in 2009. Lexus decided to use the windshield projection for their “Night View” system, while Mercedes went with the instrument cluster LCD for the S-series and navigation screen for the E-series. In the most recent version of Mercedes’ “Night View Assist Plus,” they added a warning feature for the pedestrians and animals, where the spotlights repeatedly flash a beam of light on them.

The first night vision system on the market was introduced in 2000 by GM on the Cadillac DeVille. Displayed on the windshield, the warmer objects would appear white and cooler objects black. Cadillac discontinued their passive night vision feature in 2004 since it didn't generate enough sales. The Cadillac marketing director suggested that if they were ever to revisit the night vision auto tech, they would offer active instead of passive.

BMW took the reins the next year with “BMW Night Vision” introduced in their 7-series. It can also be found in their 5-series and 6-series models - all displayed on a navigation screen. Similar to Mercedes, BMW Night Vision flashes spotlights on any close encounter pedestrians or animals and sounds an acoustic warning signal.

In 2010, Audi joined BMW with passive night vision in their A8 model and then later in their A6 and A7 models - all displayed in the instrument cluster. Different from all the other night vision systems, Audi highlights pedestrians in close range with a red light.

When Will Night Vision Be Standard?

Based on the auto manufacturers that offer night vision, it’s a fair assessment that night vision is a luxury feature. On average, night vision vehicle safety equipment adds a couple thousand dollars to the price tag, which, for the price of some of these cars, hardly makes a dent.

So how soon will it be until night vision becomes more of a standard feature offered in mid price range sedans and SUV’s? There isn't an answer yet, but based on the patterns of other automotive technology, I wouldn’t be surprised if night vision is found in Toyota Camrys and other cars of that class within the next few years. Most luxury features trickle down once the auto tech is no longer brand new.