Parallel Parking 101: Sit Back and Let Your Vehicle Do The Work

Most drivers can relate to a time where they’ve passed up the last available parking spot within walking distance of their destination because they weren’t quite sure if they could fit. No one wants to relive that time where they’ve attempted to parallel park, failed miserably, and completely embarrassed themselves in front of an audience. A handful of automotive manufacturers have sympathized with you and created technology to solve this problem… cars that park themselves!

Yes, it has come to this. Many drivers have a legitimate fear of parking in cities or other densely populated areas and have a need for this technology. Some larger cars, overall mass or length, are very difficult to park in tight spots. As a matter of fact, some drivers don't even parallel park AT ALL.

I’m sure many questions have crossed your mind, like how much involvement does the driver now have in the process of parking? Does the driver even need to be in the car? Will valet parking be a feasible service in years to come?

First and foremost, the concept of a car that parks itself is still mind blowing to me. It's much easier to grasp the concept of parking aids that help the drivers visibility, such as backup and 360˚ surround-view cameras mentioned in one of our other blogs. However, self-parking cars are a far more advanced technology.

What Does the Driver Got to Do With It?

Though there is little involvement required from the driver in the process of self parking, they still need to operate the vehicle to some degree. The car does most of the work in detecting parking spots it can fit into, determining where to position before parking, and taking over the steering wheel; but the driver needs to control the brake and gas pedals upon instruction from the car's display screen or voice as well as manually control the gears. Since self parking cars still require an operator, valet services are still in business (for now).

How Do the Sensors and Steering Work?

There are two types of parking sensor technology, one being ultrasonic and the other electromagnetic. The way ultrasonic sensors function are by discharging acoustic pulses from the front and rear bumpers that can calculate object distances with a control unit. Electromagnetic sensors create an invisible magnetic field around the bumpers that recognize objects when the car is approaching them.

Electromagnetic sensors don’t require drilling holes in the bumper since they are mounted inside the bumper. They are also able to recognize narrow and flat objects (ie. poles and ingrown surfaces), which ultrasonic sensors often miss. Unfortunately, electromagnetic sensors are a more expensive option, are less widely installed in vehicles, and are usually only seen in more luxurious vehicle models.

As for the steering; Once the driver engages the parking feature, pulls up to and stops at the spot the car instructs; he/she then puts the car in reverse, presses the control button, and sits back while the car takes complete control of the steering wheel through the power steering system. Fortunately, these self-parking cars don't actively take control of the wheel on there own without being engaged by the driver.

Self-Parking Auto Tech on the Market

Several brands have joined in on the automatic parking system proposed by Volkswagen in 1992. Although the Japanese Toyota Prius was the first car released with this amazing auto technology in 2003, Toyota’s luxury line, Lexus, was the first brand to release a self-parking car in the streets of North America (2006).

Following the 2006 Lexus self-parking release, Ford also implemented a self parking option in their luxury brand, Lincoln, three years later called Parking Assist. In 2011, BMW released Parking Assistant in their 5-series which is a parallel parking system only, geared towards European countries that don’t have designated parking spots.

After these three brands released self-parking cars in North America, quite a few more have trickled down, such as parent companies Ford, Toyota, and Volkswagen as well as other luxury companies like Mercedes and Audi.

After reading up on the whole process of how a self-parking car system works, it was only natural for me to compile a small list of pros and cons. 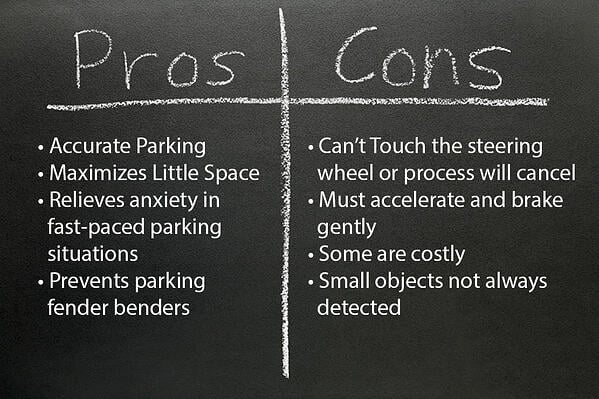 What's On The Horizon?

If this automotive technology continues to advance and become a standard practice, student drivers may no longer have to fear the parallel parking portion of the driver’s test. Parallel parking will become much more efficient for all calibers of drivers with one-shot parking jobs. Vehicles will be one step closer to running the show, which, to me, is a scary thought!

Remember how I mentioned earlier that valet parking will eventually be a useless service? Well... it most likely will be quite a few years down the road. Audi is currently working out the kinks of a technology that will allow cars to park entirely on their own, while the driver stands outside of the car and engages the operation with their smart phone.

Expect more information about autonomous driving in our next blog!

Proceed to the next article on Autonomous Driving