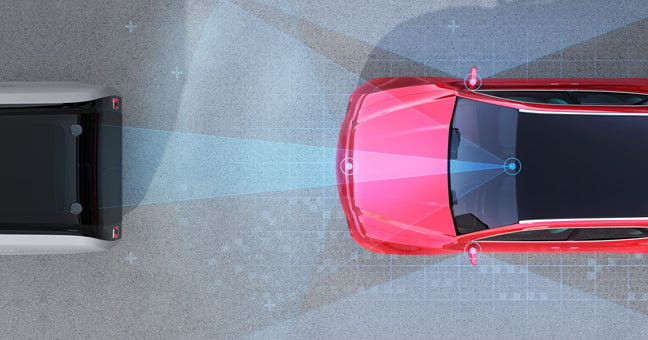 What is ADAS: The Evolution of Vehicle Safety Features

In the last ten years vehicle technology, specifically in regard to safety features, has become increasingly complex. These advanced vehicle safety features are often bucketed under the category “Advanced Driver Assistance Systems,” more commonly known as ADAS. While the key motivator of this growth has been driver safety, ADAS will play a larger role for those on the business side of automotive in everything from data collection to lending to titling over the next few years. Some of the most popular ADAS features are: braking assist, adaptive cruise control, lane departure warning, blind spot detection, and rear cross traffic alert.

Read on for a better understanding of this advanced safety technology and how it will impact automotive in the years to come.

ADAS is predominantly comprised of advanced vehicle safety features, such as autonomous braking and lane keeping. While some of these safety features are new, people are often surprised to learn that many of them were started more than 20+ years ago.

Cadillac attempted a collision avoidance system in a late 1950s futuristic porotype called the Cyclone (but scrapped the project due to its high price tag), lane departure warning was developed by a US company "Iteris" in 2000 for Mercedes commercial trucks in Europe, and the first blind spot monitoring system was available in Volvo’s 2005 S80 sedan model.

Though these technologies have been in the works for close to 50 years, vehicle computers have not been advanced enough to handle these features, and the cost to mass produce them has been too great.

As the push for self-driving cars has picked up steam, so too has the need for ADAS features at a reasonable price point.

The key driver behind the rapid growth of ADAS technology has been strict safety requirements brought about by increasing vehicle-related fatalities every year. According to the NHTSA, 35,092 people died on America’s roadways in 2015 and 94% of those vehicle accidents were due to human error. This seems to have been the turning point for vehicle safety equipment regulations.

In 2016, the National Highway Traffic Safety Administration (NHTSA) and the Insurance Institute for Highway Safety (IIHS) announced that 99% of all new U.S. automobiles will include emergency braking as a standard feature by 2022. The EU is requiring that all cars, vans, trucks, and buses be equipped with at least 15 modern safety features by 2022. Additionally, backup cameras have been required in all new vehicles since May 2018. With the standardization of these ADAS features, especially autonomous braking, we could see a huge shift in the number of vehicle-related fatalities.

How does ADAS work?

So how do these features work and what makes them so effective? ADAS is powered by radar, lidar, and cameras to determine the proximity of surrounding vehicles, as well as advanced car computers that determine when crashes are imminent and how the vehicle should react. Some ADAS systems are passive, only sounding/displaying/vibrating alerts, while others are active, alerting and then, when necessary, making split-second decisions to take action, such as braking or nudging the steering wheel.

What are the most popular ADAS features?

There are several vehicle features that fall under ADAS, and while most of them are related to vehicle safety, some are aimed at convenience, such as parking assistance. Here’s are some of the most widely available ADAS features, as well as a brief description of how they function:

Here are a few other ADAS features that are starting to gain traction, but not as widely available:

As we continue to see greater government pressure to improve vehicle safety, we can more ADAS features available as standard options, in both luxury and non-luxury brands. This will greatly impact all facets of the auto industry, which will be discussed in the next article in this series.