The NHTSA standard for VIN assignment is applied to all motorized vehicles, motorcycles, and trailers that travel on the roads, streets and highways of the US.  However, the NHTSA has no jurisdiction over recreational vehicles not intended to ever be driven on a street or highway.

These "off-road" recreational vehicles are hugely popular and account for millions of purchases and tens of millions of vehicles in use in the US every year. As a result, there is a need to decode and identify these vehicles for initial sales and marketing efforts, resale, registration, insurance, and taxation.

Are these vehicles able to be VIN decoded using the same principles and decoders used for light-duty and passenger vehicles? The answer is a solid... maybe.

These "off-road" vehicles are not under NHTSA jurisdiction unless they are created with the intent to include "on-road" use.  When "on-road" use is intended by the manufacturer, the vehicle will be assigned a 17 digit VIN.  The NHTSA standard does not address "off-road" vehicles, however, you will find that most large manufacturers of these vehicles assign a 17 digit identification number that is compatible with the ISO VIN Standard. Though it may not be compatible with more stringent NHTSA VIN requirements.

In 2003, the NHTSA excluded off-road vehicles from the VIN system, which would present a problem for the registration or insurance of these vehicles. The Society of Automotive Engineers (SAE), who was contracted by the NHTSA to assign the World Manufacturers Identifier (WMI) portion of the VIN, compensated by creating the Product Identification Number (PIN) System in 2005 to replace the off-road VIN system. Learn more about the PIN system and how it differs from the NHTSA VIN system.

Keep in mind that since regulations did not require the migration to a 17-digit standard by a certain date, each manufacturer may have a different model year that they started use of the 17-digit identification numbers. Use may even vary for a manufacturer within a model year from model to model.

Before the widespread adoption of the 17-digit standard, many manufacturers used shorter (Sometimes as short as 8 digits) proprietary identification codes that require a decoder unique to the make. Some of the smaller and low-end manufacturers still use a proprietary identification system that would not be compatible with modern VIN decoding solutions.

Where to find these VINs or PINs

ATVs - The ATV VIN/PIN location varies depending on make and model. Some common places include:

Look along the frame for a 17 digit numeric and alpha-numeric number, or check out resources at www.atvstyle.com for location descriptions specific to both make and model. 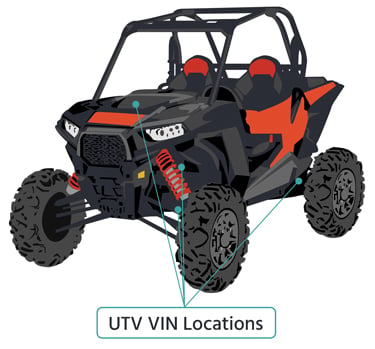 Side-by-Sides (UTVs) - The location for VIN/PIN placement also varies for side-by-sides. Here are some common locations:

There are several manufacturer-specific forums that can help identify the location as well if it's not in one of these places.

Dirt Bikes - Like motorcycles, the VIN/PIN number can usually be found on the steering neck.

Snowmobiles are not required by the NHTSA to have a 17 digit vehicle identification number to be sold within the U.S.  However, since Jan 1, 2001, Transport Canada has required a 17 Digit VIN be assigned to Snowmobiles that is specific to make, line/model and engine.  As a result of this requirement, many manufacturers (Yamaha, Artic Cat, Bombardier, Polaris to name a few) assign a 17 digit VIN that meets the Canadian regulations to all the snowmobile models that are sold in the US and Canada.

Among many other similarities with on-road vehicle VIN numbers, the number 1 and 4 (also #5 for on-road) signify the snowmobile was manufactured in the U.S., while 2 signifies Canada, and J signifies Japan.

Where to find a snowmobile's VIN or PIN

Fortunately, the VIN or PIN number is much easier to locate on a snowmobile than it is on an ATV or UTV. This number is typically located on the right side tunnel decal where your foot rests just above the running board. 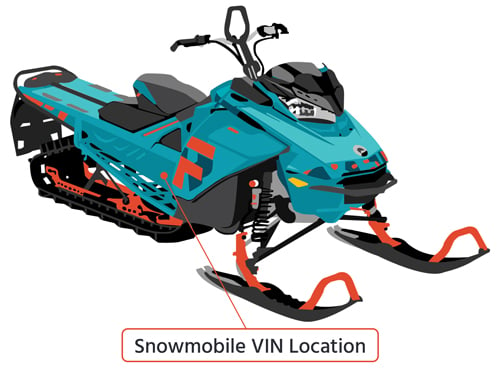 What to Expect from an Off-Road Vehicle VIN Decoder

What can you expect if you are hoping to VIN Decode these off-road segments of the vehicle population?  Unlike passenger vehicles in MY1981, there is not a clean start model year when off-road OEMs started using 17-digit VINs.  So expect some inconsistencies in year ranges covered by different manufacturers. In addition, not all manufacturers assign 17 digit VINs.  However, most of the large manufacturers do, and use them consistently.   Based on these two facts, a VIN decoding solution is not a stand alone option if you are looking to identify off-road vehicles over a large span of years or across a large number of smaller manufacturers.  On the other hand, since most major manufacturers use the VINs in recent years, a decoding solution can be a very helpful, important and time-saving tool if your business works regularly with off-road vehicles.

Interested in decoding the trailers that tow your recreational vehicles? Learn all about trailer VIN decoding in this article.

Continue on to our next article VIN Decoding 101 Part 9: VIN Decoding Outside the Light-Duty and Passenger Vehicle Segment